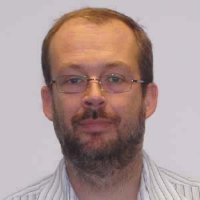 4 August 2015:  SMPTE member and Australasian industry identity Robert Rutherford has died, following a battle with brain cancer.   From his school days he was known to his friends by the nickname Ruzz.

After graduating from the University of Sydney, where he earned a BSc and a BE with 1st class honours and University Medal, Rob worked at Scitec Communications as a hardware engineer.  He joined the Seven Network in 1991 in their Digital Systems department, and played a pivotal role in the network’s upgrade of its automation system, designing and developing several in-house components.

After a spell in the US working for Alamar, he returned to Sydney in 1999 to start his own company – Ruzz Technology (later to be renamed Ruzz TV). The company started with a contract for Granada UK. The next work for Ruzz Technology was covering the basketball scoring for SOBO during the Sydney 2000 Olympics. This was a particular highlight for Rob, a chance to combine his love of basketball with his work, and to do it for the biggest event in Australia.

Ruzz TV grew from a couple of people working in a spare room of his house in Ermington to having 16 employees and customers including SBS, Seven, Southern Cross, Foxtel, Fox Sports and Sky News.

Rob was an active member of the SMPTE, and a strong supporter of the Australia Section’s efforts.

Outside of work Rob was well known for his sporting interests. He played competitive Frisbee, representing Australia at world championships. He also played and was an avid spectator of basketball, especially the Sydney Kings. He enjoyed watching both his children play and was involved with administration of their clubs.

Rob was diagnosed in May 2014 with an aggressive brain cancer, Glioblastoma Multiforme (GBM). He fought this hard with his characteristic determination and dignity.

Robert is survived by his wife Amanda and his teenage children Cameron and Emma.