On 26 Mar 2015 we featured something truly special:  three of our number recounting their time at Ealing Studios during the stewardship of the BBC.   This video is a recording of that night, put together by Ray Henman. 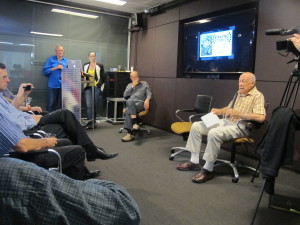 Ealing Studios is the longest continuous running studio in the world, from its founding in 1902 to present day.  The BBC took over from the Michael Balcon era in 1955 and operated Ealing through to the mid 90’s. By 1960 they had 25 crews which expanded to about 50 crews-plus in the mid 70’s.  And this number did not include the News and Current Affairs crews that came from a different source.  In the UK summer, holiday relief freelance crews were brought in, up to 20 crews.

These days the studios are booked up about two years in advance.

Grab a coffee and watch!

Butch Calderwood OAM ACS (cameraman) joined the BBC World Service in 1953 at Alexandra Palace and moved to Lime Grove Studios (current affairs Panorama etc) in 1955 he was the first film trainee; and stayed with PANORAMA for many years but also shot drama at Ealing.

Bernard Ashby (editor) joined TFS in the early 60’s and was there for 30 years, he moved to Australia in the 90’s editing ABC and BBC co productions etc. BERGERAC and WARSHIP were some of his achievments.

Ray Henman ACS (cameraman) joined BBC TFS in 1965 and was there till 1975 working on documentaries and drama including THE SNOWGOOSE in 1971 for which he received an Emmy nomination. Other programmes included David Attenborogh’s series LIFE on EARTH & TRIBAL EYE in Australia, Nigeria, Canada and the US, I also spent six years shooting the Queen’s Xmas speech in the Palace and Prime Minister conferences around the world etc. I then continued working for the BBC in a freelance mode for 30 years in Australia and abroad from 1975.