Chris Fetner from Netflix to Keynote at SMPTE15

Chris Fetner, director of global content partners operations at Netflix, will present the opening keynote at SMPTE15 on 14 July 2015. 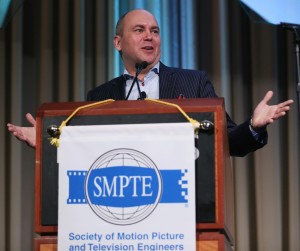 “Chris delivered the opening keynote at the SMPTE 2014 Annual Technical Conference & Exhibition in Hollywood to a standing-room-only crowd and earned rave reviews, and we expect no less at the SMPTE15 in Australia,” said Pat Griffis, SMPTE education vice president and executive director of technology strategy in the office of the CTO at Dolby Laboratories.

“With its expansion into new markets over the past several years, Netflix has become an industry disrupter on an international scale. Chris is positioned to shed light on the company’s international activities, as well as the factors shaping the company’s technology decision-making.”

Fetner, a SMPTE member, began his career as an operations manager at a local Public Broadcasting Systems (PBS) affiliate in Washington, D.C., and went on to serve as a producer for television programs including the award-winning show “Frontiers of Medicine.”

He later served as a postproduction and operations executive at Discovery Communications, guiding the company’s migration to an all-digital workflow, and as vice president of postproduction and technical services at the British Broadcasting Corp. (BBC) Worldwide in New York, where he oversaw all technical operations supporting both the cable network BBC America and its distribution to electronic sell-through (EST), video-on-demand (VOD), and subscription video-on-demand (SVOD) customers.

“The presentation Chris did at the 2014 Hollywood event was jawdropping”, said John Maizels, SMPTE Governor for the Asia Pacific Region. “He knows his stuff, brings a new perspective, and everyone left the room on a high.   We expect great things at SMPTE15.”

For more information on the SMPTE15 Conference and Exhibition, and to register, go to the Event website at www.smpte.com.au.