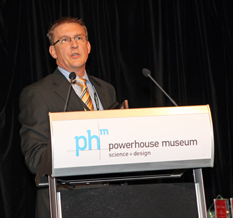 At the June meeting of the SMPTE Board of Governors, it was announced that Trevor Bird of Seven Network has been named as a Fellow of the Society.
The grade of Fellow is awarded to Trevor in recognition of his contribution and achievements to the industry at large over an extended period, as well as to development and delivery of technology within the Seven Network and the Olympics. Trevor currently holds the position of General Manager – Group Technical Services, Seven Network.
Peter Symes, SMPTE Director of Standards & Engineering presented Trevor with his Fellowship Certificate at the SMPTE09 Gala (pictured).
The Fellow Grade of membership is awarded to individuals who have, by proficiency and contributions, attained an outstanding rank among engineers or executives in the motion-picture, television or related industries. Nominations for the Fellow grade of membership are made annually and submitted to the Chair of the Fellow Membership and Qualifications committees by members of the Fellow Membership Committee.