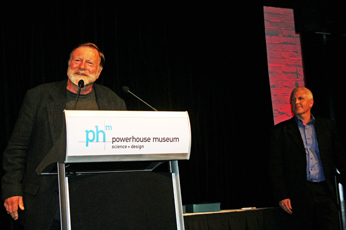 The Australia Section of SMPTE (the Society of Motion Picture and Television Engineers) used the recent SMPTE09 Gala to confer its inaugural Lifetime Achievement Award for Services to Australian Film and Televisionis proud to Jack Thompson.
An Australian acting icon, Jack Thompson has played a significant role both on and off the screen. Acting for over 40 years, Jack is a well respected contributor to both the film and television industry. Whilst internationally renowned for his acting, Jack is also a producer and a writer for the screen.
After winning Best Supporting Actor for Breaker Morant at the Cannes Film Festival in 1980 and dedicating the award to the Australian Film Industry, the media named him, the “flagship” of the industry. He continues to be respected in this role today and commits himself to championing the future growth and development of the Australian Film and Television industry.
“He is a supporter of quality writing, leading technology and production values that SMPTE holds as core principles. His approach, leadership and body of work, has inspired the last generation and is empowering this generation of film and television professionals both on screen and behind the camera,” says John Maizels, SMPTE Governor for the Asia Pacific Region.
Jack Thompson’s career started on television in 1968 and transitioned into film in 1970. His first film role was as Dick in the breakthrough movie, Wake In Fright (internationally released as Outback) a production which shocked Australian audiences but galvanised the Australian film industry into action in the 1970’s. Inspiring hundreds of filmmakers across the world, Wake In Fright was critically acclaimed but rarely seen and was considered lost to the Industry.